Sail Training International recognized the Picton Castle and its sailing program as Sail Training Organization of the Year at its International Sail Training and Tall Ships Conference 2018 Awards ceremony in Seville, Spain, at the beginning of this month. This inspired us to take a peek at the Ship Notes, Seaport & Museum News section of Sea History 68 (Winter 1993–94), where there appeared a modest little notice: 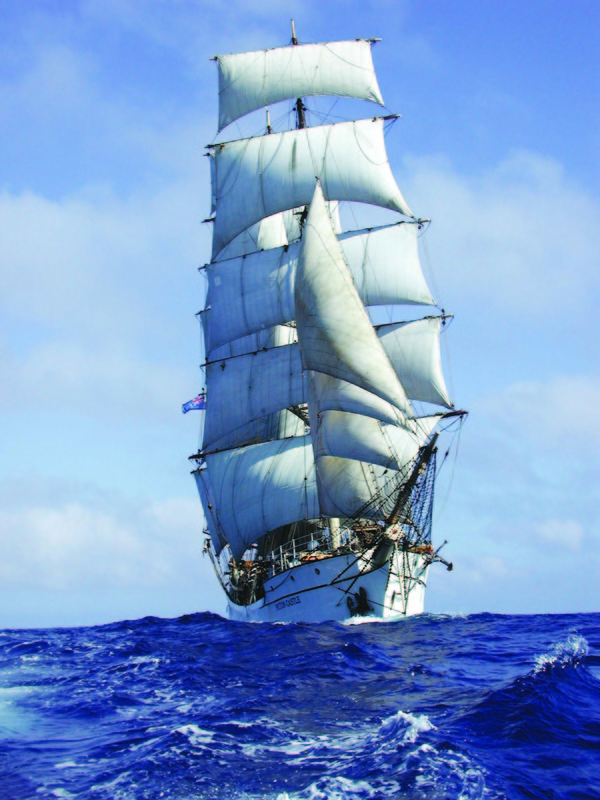 The Dolmar ls Coming; Life as a Sailing Bark Begins

Ultimately, a sailor must have his vessel; in the case of well-known historic ship master Daniel Moreland, it must also be the ultimate vessel. In May, Moreland and a cadre of friends traveled to the small island of Karmøy, Norway, to take possession of Dolmar, formerly the North Sea steam trawler Picton Castle, which also served as a minesweeper in WWII. The steel-hulled vessel measures 299 gross tons, 142-ft overall, and, in Moreland’s opinion, “is an excellent seagoing ship, and will make an outstanding bark.” Moreland plans to make a deep-sea sailing vessel out of Dolmar.

In June, she underwent a major hull and engine overhaul at the Thomsen and Thomsen Shipyard in Marstal, Denmark, and then departed for Ipswich, England. Moreland will shortly press on from Ipswich to New York before departing for Lunenburg, Nova Scotia, where he plans to set up the Windward Isles Rigging School, taking on apprentice riggers to join his crew and rig the Dolmar into a lofty bark.

Capt. Moreland (pictured above, center), a sailing veteran who sailed under Captain Arthur Kimberly in the brigantine Romance, trained cadets aboard the Danish square-rigger Danmark, and oversaw the previous restoration of the Grand Banks fishing schooner Ernestina (now Ernestina-Morrissey), restored the name Picton Castle to the “lofty bark,” now carrying 12,500 square feet of sail. His first voyage around the world with the newly refitted ship began in its new home port of Lunenburg, on 25 November 1997. Captain Moreland is currently underway with the Picton Castle on her seventh world voyage. In the intervening years, over 2,000 people from over 20 countries have served as trainee crew in the program, and their voyages have covered over 300,000 nautical miles. When Picton Castle is not off circling the globe, the program’s Bosun School, based in Lunenburg, is an opportunity for students to focus on skills without the everyday demands of a ship underway.

Picton Castle has berths for 12 full-time crew and 40 trainees. Trainees do not need previous sailing experience, just the ability to meet the physical demands of the tasks of serving on the crew of a sailing ship. The current voyage is slated to visit Panama, the Galapagos, Pitcairn, French Polynesia, the Cook Islands, Vanuatu, Bali, Reunion, South Africa, St. Helena, and the Caribbean.  The current voyage began on 3 May of this year “with 47 people and two cats aboard.” Stops so far have included the Cook Islands, Pitcairn, Vanuatu, Fiji and Bali; Picton Castle plans on calling on South Africa, Namibia, St. Helena, a number of Caribbean islands and Bermuda before returning to Lunenburg in May 2019.

We would like to extend our congratulations to Capt. Moreland and everyone involved in the Picton Castle program, handing down the skills of seafaring to another generation and maintaining this proud member of the sail training fleet. You can read more about the history of Picton Castle in her many appearances in Sea History magazine. To learn more about Picton Castle, the sail training program and Bosun School, visit the website at www.picton-castle.com.