Skipjack Nautical Wares & Marine Gallery of Olde Towne Portsmouth, VA, is hosting Art in a Bottle, a collection of exceptional ship-in-bottles and dioramas from the 19th century through the present and featuring recent creations by maritime artists Heather Gabrielle Rogers and Tom Applegate. 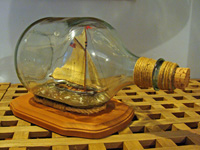 The first known ship inside a bottle was during the early 19th century, like other sailor-made art forms created aboard old sailing ships in an era when sea voyages lasted months and sometimes years. Whalemen, during their idle hours, produced scrimshaw for family members, sweethearts, and friends. Decorative and utilitarian objects were carved from bone, ivory teeth, and baleen, and designs were engraved on the same materials. But other materials such as wood, rope and yarn were also used, and many interesting and decorative objects were created from these. It is not surprising then that an empty spirit or a medicine bottle lying around aboard ship might have spurred the imagination of a 19th century seaman into devising a way to display a model ship in it.

Whatever the origin, the technique for placing ships into bottles was passed along and over time became a favored art form for sailors. Some sailors produced a facsimile of the ship that they sailed aboard; others may have created multiple ships passing by under full sail on rough painted clay seas or a diorama of a ship in harbor with the seaport in a background, a lighthouse at the harbor’s edge, possibly with tugboats in tow. These works can now be found in maritime museums around the world for there are few sailor-made decorations as nautical as a bottled ship.

Today, ship-in-bottle artists have taken the old sailor art form and produce exceptional works of art with microscopic detailing. A selection of new works by Heather Gabrielle Rogers and Tom Applegate will also be a focus of this nautical show.