The SS United States Conservancy (SSUSC) has announced that it has entered into a preliminary agreement in support of the redevelopment of SS United States. While few details are available at this time, the SSUSC issued a press release announcing the agreement on Monday.

Designed by William Francis Gibbs and built by the Newport News Shipbuilding and Dry Dock Company, SS United States was subsidized by the US government with the understanding that she would be repurposed for troop transport should the need ever arise. Strict US Navy standards were observed, including compartmentalization to combat flooding and dual engine rooms for redundancy in case one of them was rendered inoperable. Designer Gibbs also went to great lengths to prevent the threat of fire; no wood was permitted in any of the public rooms, with the famous exception of the grand pianos and the catering crew’s butcher blocks.

United States undertook her maiden voyage on 3 July 1952 from New York to Le Havre and Southampton, and on that voyage set a record for the eastbound crossing by a liner, earning the ship the historic Blue Riband for her achievement. The ship enjoyed a decade of prestige, hosting statesmen and celebrities on the Atlantic. The 1960s saw a decline in ocean travel, and in 1969 she was removed from service. She changed hands multiple times since retirement, and has been berthed in Philadelphia since 1996. The SSUSC purchased the United States in 2010, and has been looking for partners to develop the ship as a multipurpose venue. This new announcement might signal the first step in a new incarnation for the historic liner. 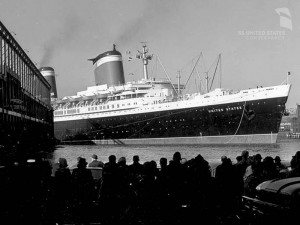