NMHS is proud to announce the unveiling of a headstone at the grave of legendary naval architect John W. Griffiths on Saturday, 23 July 2016. The ceremony will take place in Queens at the Linden Hill United Methodist Cemetery at 10:30 am. John W. Griffiths (6 October 1809 – 30 March 1882) was a maverick of American shipbuilding, a naval architect, and the designer of steamships, war vessels and the record-setting Rainbow and Sea Witch clipper ships. In 1849, Sea Witch sailed from Hong Kong to New York in 74 days 14 hours, a record which has not yet been broken by a single-hull sailing vessel. Griffiths authored several books, while his innovations and patents left a lasting impression on ship design and construction.

Despite his reputation as a “naval architect genius,” Griffiths died in poverty, and was buried in an unmarked grave in Queens, NY. 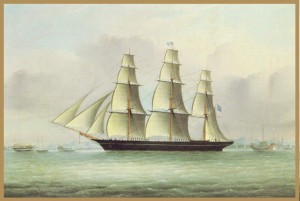 In 2012, the lack of a headstone was discovered when Matthew Carmel wanted to give a rubbing of Griffiths’ headstone to his friend, Melbourne Smith, Chairman of the National Maritime Historical Society Advisory Committee, since he knew that Smith gives credit for much of his historic ship design skills from studying the works of Griffiths.  To their surprise, there was no headstone and further research
revealed there never was one.  The two men then began the efforts to give the marine and naval architect a proper headstone.  The new monument was designed by Melbourne Smith to honor this great American ship designer. Steadily gathering momentum since the 25 October 2013 New York Post article “Grave Injustice for NY Ship Hero,” the John Willis Griffiths Gravesite Project seeks to honor this “maverick of American ship-building at a time when it was one of (New York) City’s most important industries.” The New York Post article sums it up: “New York, and the nation, owe Griffiths an appropriate headstone.”

The National Maritime Historical Society is proud to celebrate the life of John Willis Griffiths and the public is invited to attend the ceremony to unveil his well-earned and long-awaited headstone.

Cars will be able to park near the gravesite.

A luncheon will be held after the ceremony at a restaurant which is approximately a 30 minute drive from the cemetery.

Please RSVP by July 15 to nmhs@seahistory.org or 914 737-7878 x 0. The cost for the luncheon is $45 per person; pre-paid with a cash bar. [Valet parking is available or a garage is located at the City Lights Apartment Building which is 100 feet away from the restaurant at 4-74 48th Avenue.]