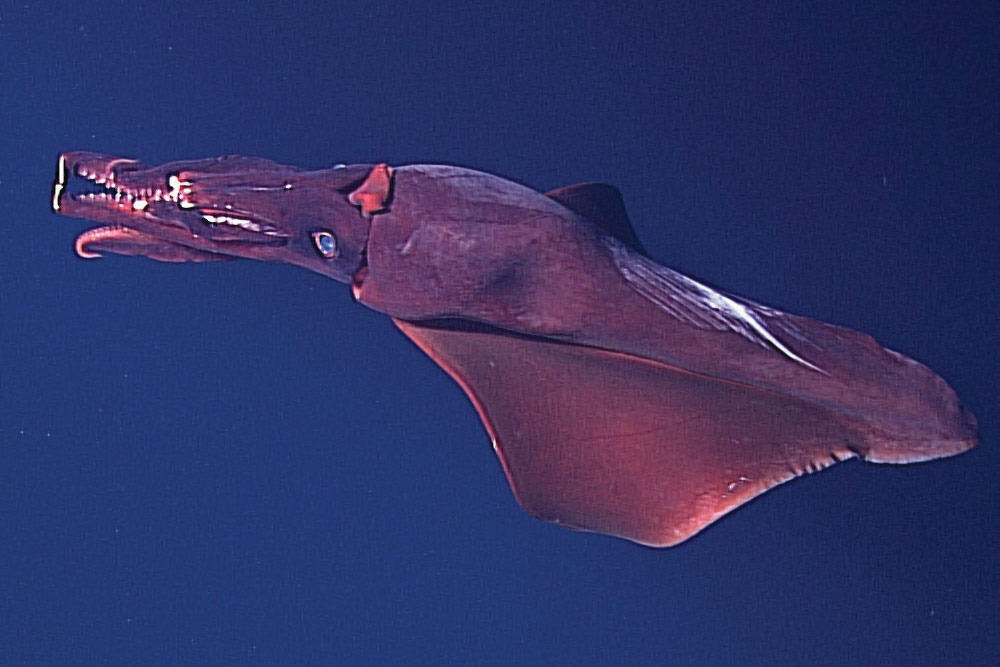 Scientific Name:
Taningia danae
These squids have been found as deep as 4,090 ft. and in all oceans except the polar seas. Maxium weight recorded = 355 lbs.

Skulls, diseased bones, taxidermed animal specimens, and preserved human organs in jars line the walls in floor-to-ceiling shelves of the lovely Hunterian Museum in London, England. This collection traces the history of medicine, based largely on the work of John Hunter, a Scottish doctor and scientist in the 1700s who studied both human and animal anatomy. Preserved in one of those specimen jars is something that looks like a dumpling suspended from two thin strings. This turns out to be a nearly 250-year-old beak from an enormous squid. 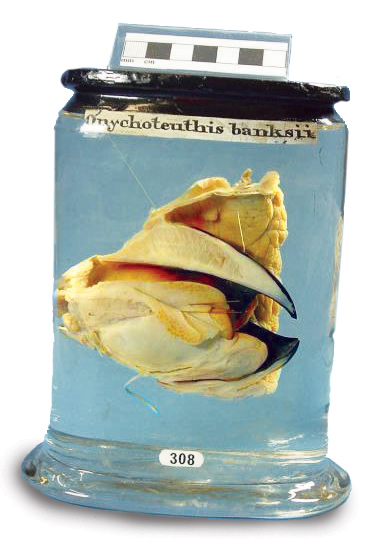 Here’s the story: on 3 March 1769, the English naturalist Joseph Banks was out catching seabirds from a small boat in the far South Pacific during the first of Captain James Cook’s world voyages. Banks wrote in his journal that evening:

I found also this day a large Sepia, or cuttlefish, lying in the water, just dead, but so pulled to pieces by the birds that its species could not be determined. Only this I know, that of it was made one of the best soups I ever ate. It was very large; and its arms, instead of being like the European species, furnished with suckers, were armed with a double row of very sharp talons, resembling in shape those of a cat, and like them, retractable into a sheath of skin, from whence they might be thrust at pleasure. 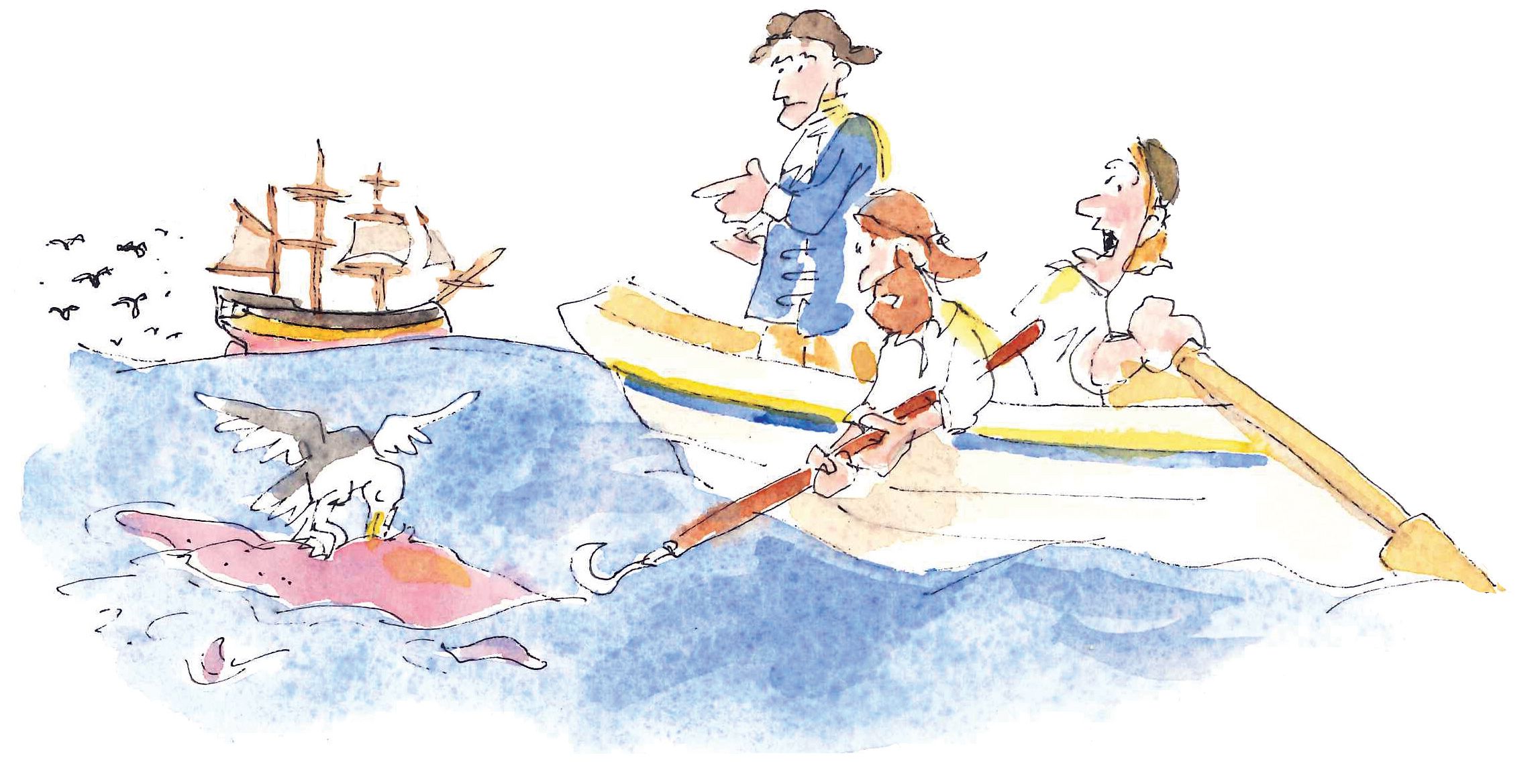 The naturalist did not, however, allow the entirety of this rare squid to be turned into a calamari chowder for the captain’s dinner table. Before he handed it over to the cook, he preserved an arm, some of the guts, and the beak. Banks eventually delivered them to John Hunter back in London for further study.

Scientists have continually renamed this species of squid over the years, as we’ve learned more and more about it. In 1881 Sir Richard Owen, founder of the British Natural History Museum and former curator at the Hunterian Museum, wrote the first detailed description of Cook’s “great hook-armed Cuttle-fish” and commissioned a series of illustrations. Owen praised the “rescue” of the specimen from “the cooking-galley of the Endeavour.” 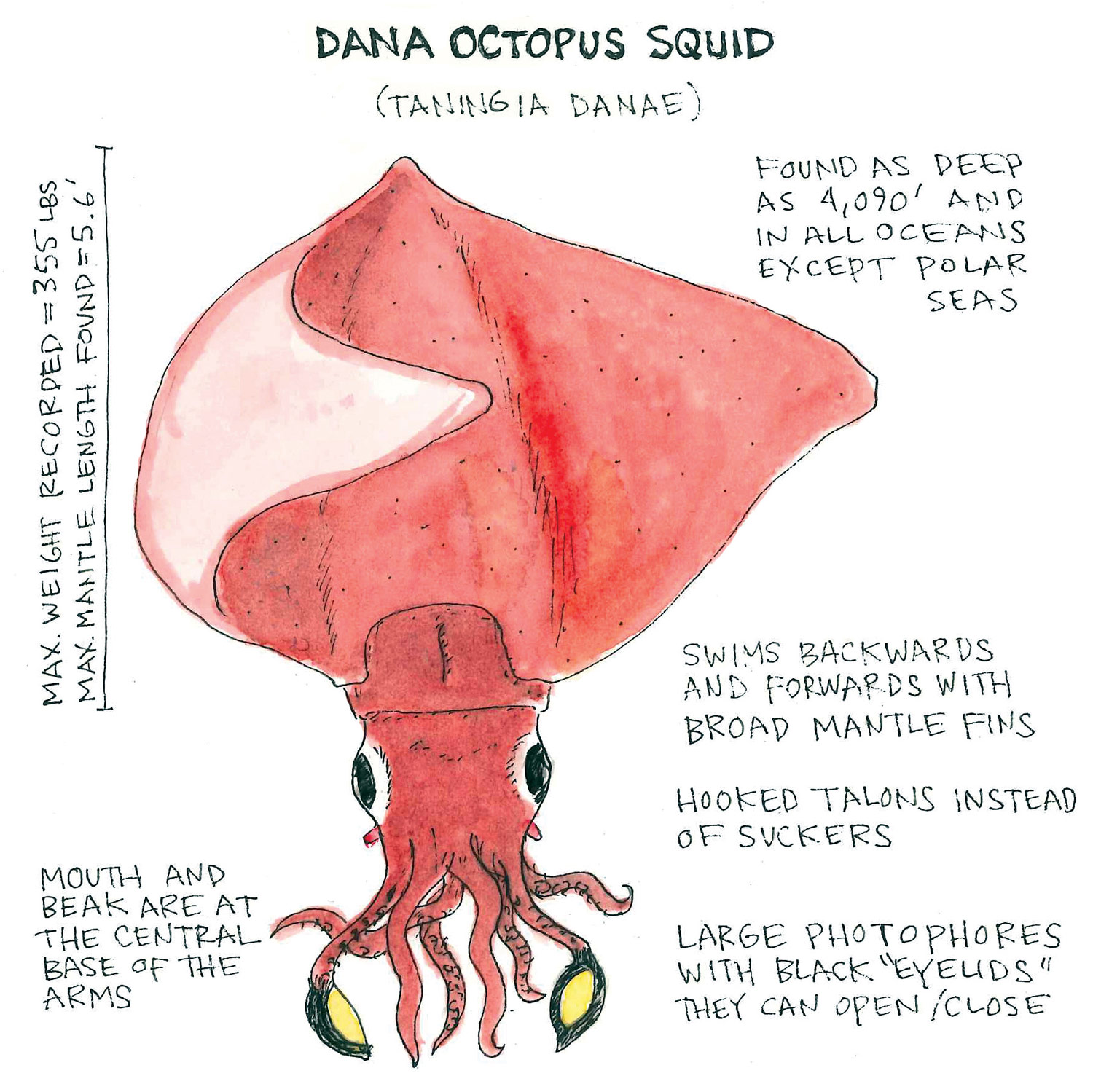 The Dana octopus squid is one of the largest squids on Earth, and can grow to seven feet from the top of its mantle to the end of the arms. They swim throughout the world from Alaska to Tasmania and from Norway to South Africa. It’s called an “octopus squid” because it does not have the long tentacles that usually differentiate the two animals; this species has tentacles that shrink as it ages, remaining only, if at all, as little stumped tentacles as an adult.

As Joseph Banks observed, the Dana octopus squid do indeed have retractable hooks along their arms, which suggests they are active predators of fish. Like other squid, they use their arms to bring food to their mouths, where that hawk-like beak, made from chitin (the same stuff as a lobster shell), tears and holds the flesh before swallowing. 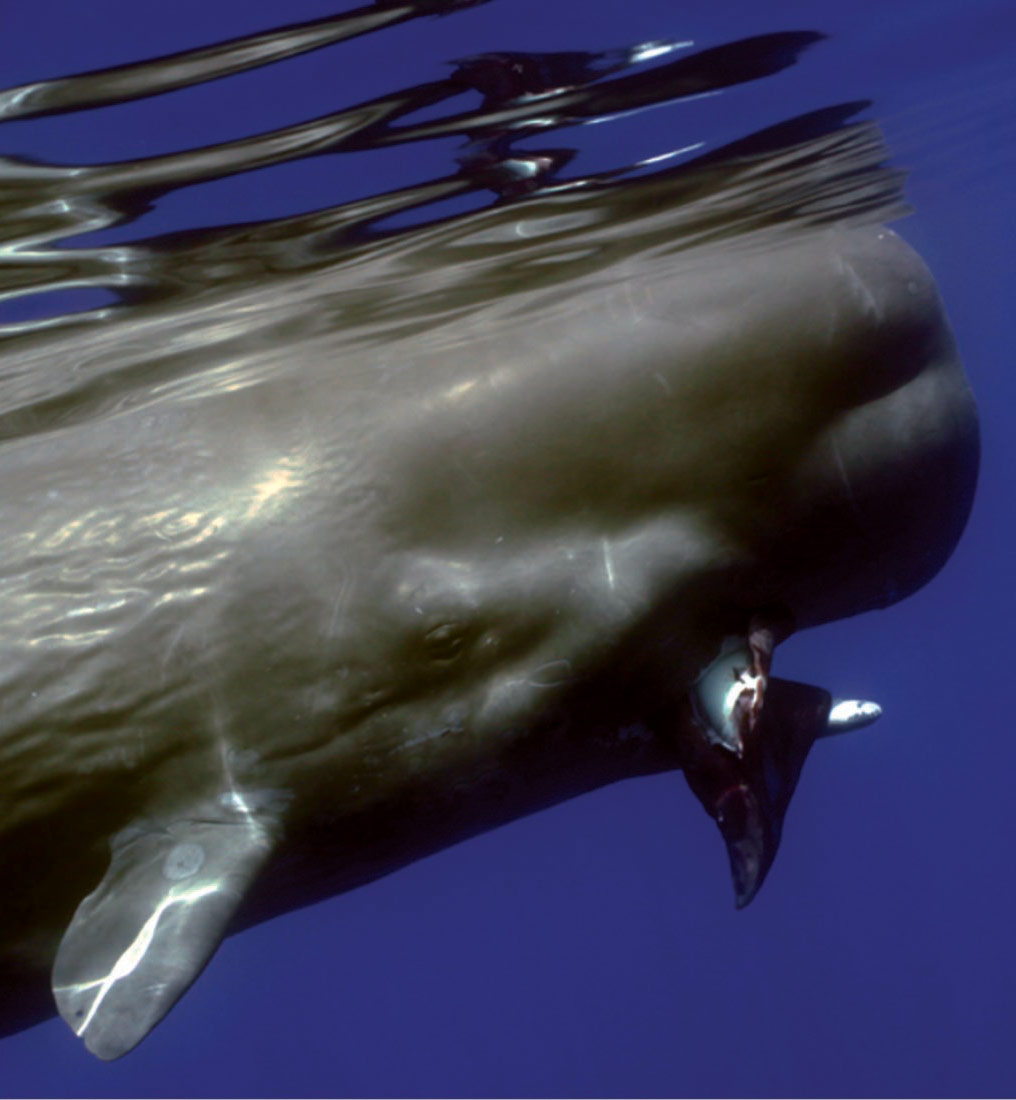 A sperm whale off the Azores, eating what biologists believe to be a Dana octopus squid.

Even in 2016, as with all deep ocean squid, we know very little about their feeding and hunting behavior. Our knowledge of these creatures comes mostly from samples brought in as by-catch of deep-sea fishermen or from the bellies of sperm whales, one of their known predators.

It was not until 2005 that a group of scientists off Japan, led by Tsunemi Kubodera, first filmed a live Dana octopus squid underwater. Kubodera’s team filmed this animal in the very deep, dark sea, far below surface light. They watched for the first time in the wild its fist-sized photophores—a light-emitting organ—actively flashing at different times in different patterns by opening and closing black eyelid-like membranes. Kubodera and his colleagues believe the Dana octopus squid might use the light to blind prey or even to gauge distance. They theorize it might also be involved with courtship.

If Joseph Banks or Captain Cook had any idea of this squid’s ability to make light, they might have been slower with the mincing knife!

Featured photo: This image of a Dana octopus squid gives a good view of the animal’s siphon, the pinkish part between the eyes, used for expelling water and ink. This photo was shot from a remotely operated vehicle (ROV) by scientists aboard the NOAA ship Okeanos Explorer during a research expedition exploring the deep-sea ecosystems of the Hawaiian Archipelago in 2015.