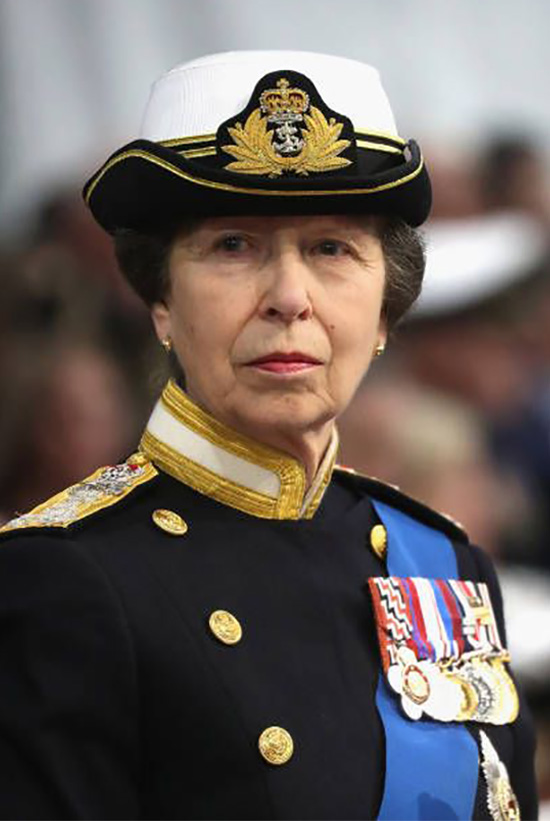 Princess Anne has been closely involved with the National Museum of the Royal Navy since its inception and, prior to this, with the Royal Naval Museum, one of the four founding partners of the National Museum. Her Royal Highness takes a close personal interest in its achievements and future plans. The Princess Royal has visited the museum on many occasions, as well as hosting events at Buckingham Palace. The National Museum of the Royal Navy is honored to have Princess Anne as its Patron; her support has been key to its many achievements. The Princess Royal is also Patron of the Unicorn Preservation Society. HMS Unicorn, launched in 1824, is the only example of a wooden frigate of her type still in existence; she is being preserved in her current condition.

HRH is a keen sailor and is President of the Royal Yachting Association. In April 2015 HRH met the crews of the British Universities and Colleges Sport Yachting Nationals to present the awards. University sailing provides opportunities for students to get involved with yacht racing and sailing. The Princess Royal was the Patron for London 2015 International Shipping Week, which aimed to promote the importance of global shipping.

The second child and only daughter of Britain’s Queen Elizabeth II and His Royal Highness The Duke of Edinburgh, HRH Princess Anne was born in 1950 at Clarence House, London, and baptized Anne Elizabeth Alice Louise at Buckingham Palace. She attended Benenden School, a boarding school in Kent, and thereafter began caking on public engagements. In 1987 Her Majesty Queen Elizabeth II conferred upon her the title Princess Royal, a title often given to the eldest daughter of the ruling British sovereign; she is the seventh princess to hold chis title. Princess Anne was appointed a Dame Grand Cross of the Royal Victorian Order (GCVO) (1974), Extra Companion of The Queen’s Service Order (1990), and a Lady of the Most Noble Order of the Garter (1994), and she was appointed to the Order of the Thistle, in recognition of her extensive charity work in Scotland, in 2000.

The Princess Royal is sometimes called “the hardest-working royal” and “the busiest royal,” recognizing her demanding schedule; she attended over 500 engagements last year. Save the Children Fund was the first major charity with which she was associated; she has been its President since 1970. Founded in 1917 to aid children in war-ravaged Central Europe, today Save the Children is active in 120 countries, offering assistance through health and nutrition programs, education, and disaster relief

Princess Anne is an accomplished equestrian; she won the individual tide at the European Championship three-day event in 1971, and she was voted the BBC’s Sports Personality of the Year. She followed up with a silver medal in the individual and team events at the 1975 European Eventing Championship, and she was a member of the British Olympic Team at the 1976 Montreal Olympic Games.

It is an honor to recognize Her Royal Highness with this year’s Distinguished Service Award.