Please join us for the final NMHS Seminar Series lecture of the year, featuring a panel discussion with author and historian Jerry Roberts, Plimoth Patuxet Museums’ Director of Maritime Preservation & Operations Whit Perry, and Mystic Seaport Museum Senior Curator for Watercraft Quentin Snediker. Sea History editor Deirdre O’Regan will moderate this lively conversation via Zoom as we commemorate 2020’s quadricentennial of Mayflower’s arrival on the shores of Massachusetts, the introduction of the people we now call the Pilgrims into the American narrative, and the restoration of Mayflower II, a reproduction of the 17th century Mayflower and an iconic ship that features in maritime history both symbolically as the first great American story and in its own right as a historic ship, launched in England in 1957. Since then, under Plimoth Patuxet’s stewardship, millions of visitors have crossed Mayflower II’s decks to learn about the Pilgrims’ journey on this living history museum in Plymouth Harbor. 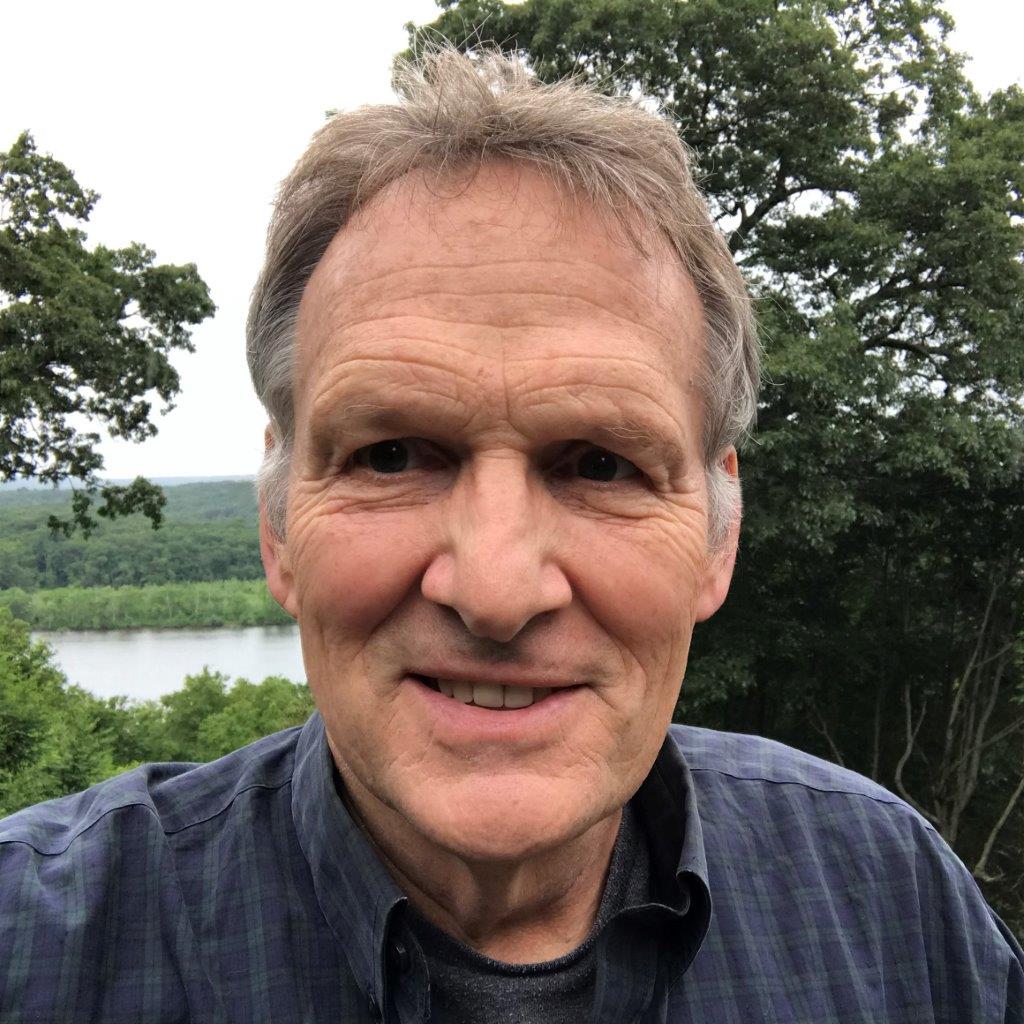 Author, historian, and veteran museum professional Jerry Roberts will start us off with a discussion of Mayflower’s arrival and the incredible story of how this one voyage has impacted our nation and, indeed, our world.  Author of the summer 2020 Sea History feature article on the “Mayflower Factor,” Jerry asks us to consider how, in a nation of rapidly evolving demographics and diversified cultural identities, the Mayflower story is still relevant, and to whom? Every family has its own Mayflower story in one form or another, and today there are an estimated 10 million living Americans who are descended from its original passengers! 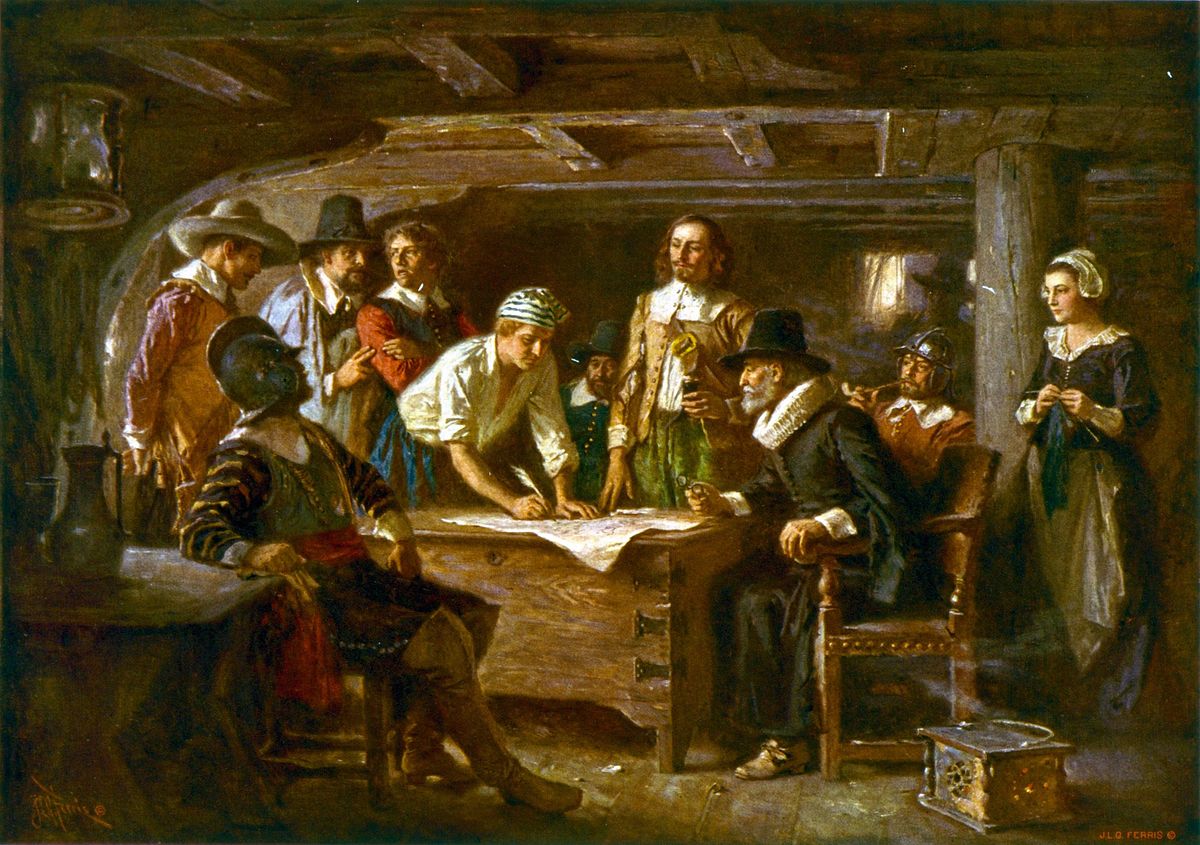 A great story-teller, Jerry starts the Mayflower story where it begins – with a small group of religious dissenters who separated from the established Church of England and set sail in September 1620 on a merchant ship, hoping to start a new life on the other side of the Atlantic.  After two miserable months at sea, the ship finally reached the new world dangerously late in the season, at the onset of winter.  The drafting and signing of the Mayflower Compact would establish self-government and was an early attempt at democracy.  During their first winter on the New England coast however, more than half of the Plymouth colonists would perish due to the effects of exposure and malnutrition.  By spring, critical assistance was provided by the area’s native Wampanoag, enabling the colony to survive and become viable. At the end of the next summer the Plymouth colonists were able to celebrate their first successful harvest with a three-day festival of thanksgiving, a feast that we still commemorate today. 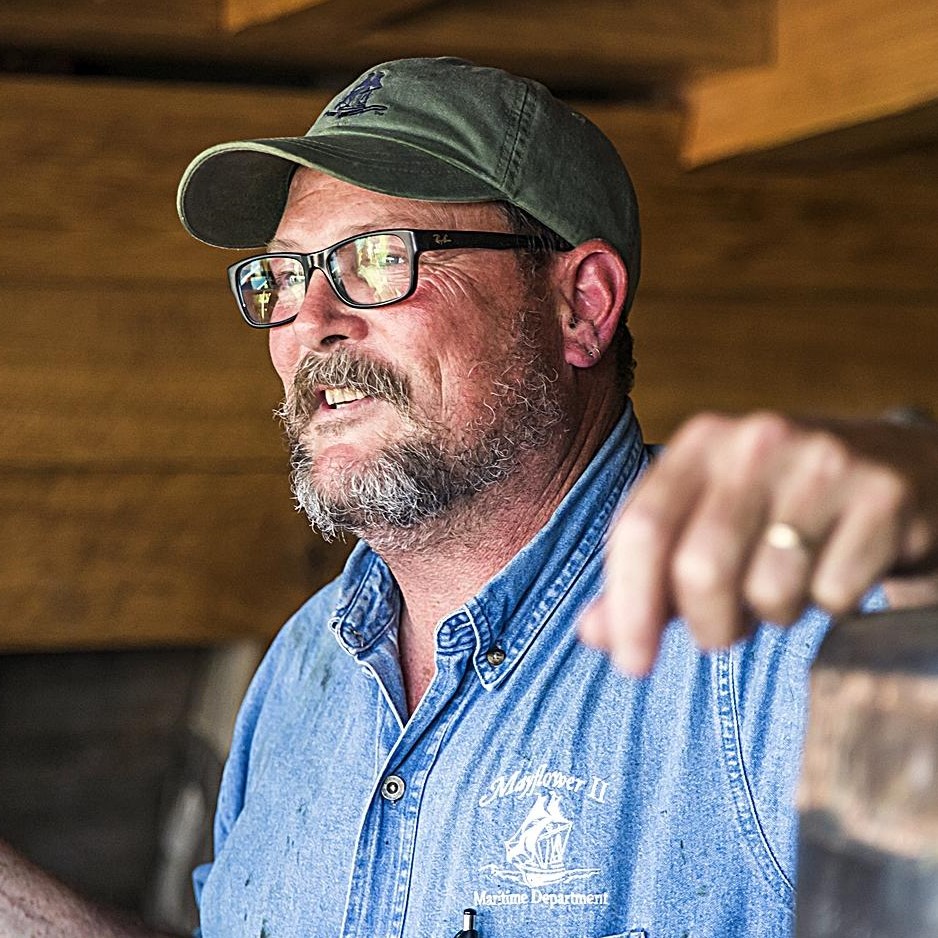 Whit Perry is director of Maritime Preservation and Operations at Plimoth Patuxet where, through powerful personal experiences of history, the museum tells the stories of the Wampanoag people and the English colonists who created a new society – in collaboration and in conflict – in the 1600s.  Whit is also captain of Mayflower II.  Under his direction and in collaboration with Mystic Seaport’s Henry B. DuPont Preservation Shipyard, the historic ship underwent a multi-year, multi-million-dollar restoration.  Whit’s team of maritime artisans worked alongside shipwrights, riggers, caulkers, and painters at Mystic – a crew of nearly 30 – making steady progress on a project that would eventually replace 75% of the ship and earn it a spot on the National Register of Historic Places. 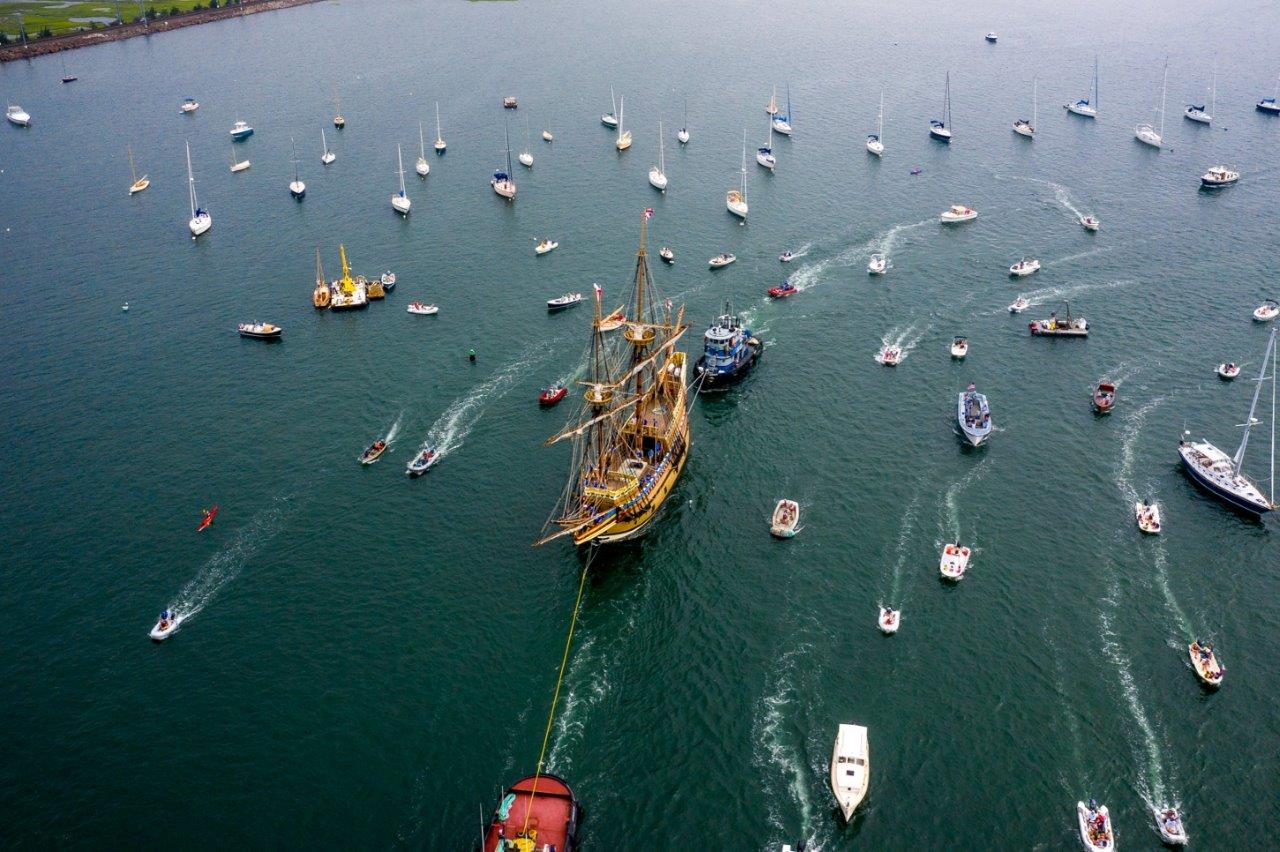 Mayflower II returned home to Plymouth, Massachusetts in August this year. The original plan had called for a celebratory departure in late April with several stops at southern New England ports, including in Boston Harbor under sail with USS Constitution for a maritime festival to mark the 400th anniversary of the original Mayflower voyage.  Unfortunately, those plans were scrapped because of the pandemic, but it didn’t stop spectators from enthusiastically viewing the ship’s journey from various vantage points and online with live video from Plimoth Patuxet. 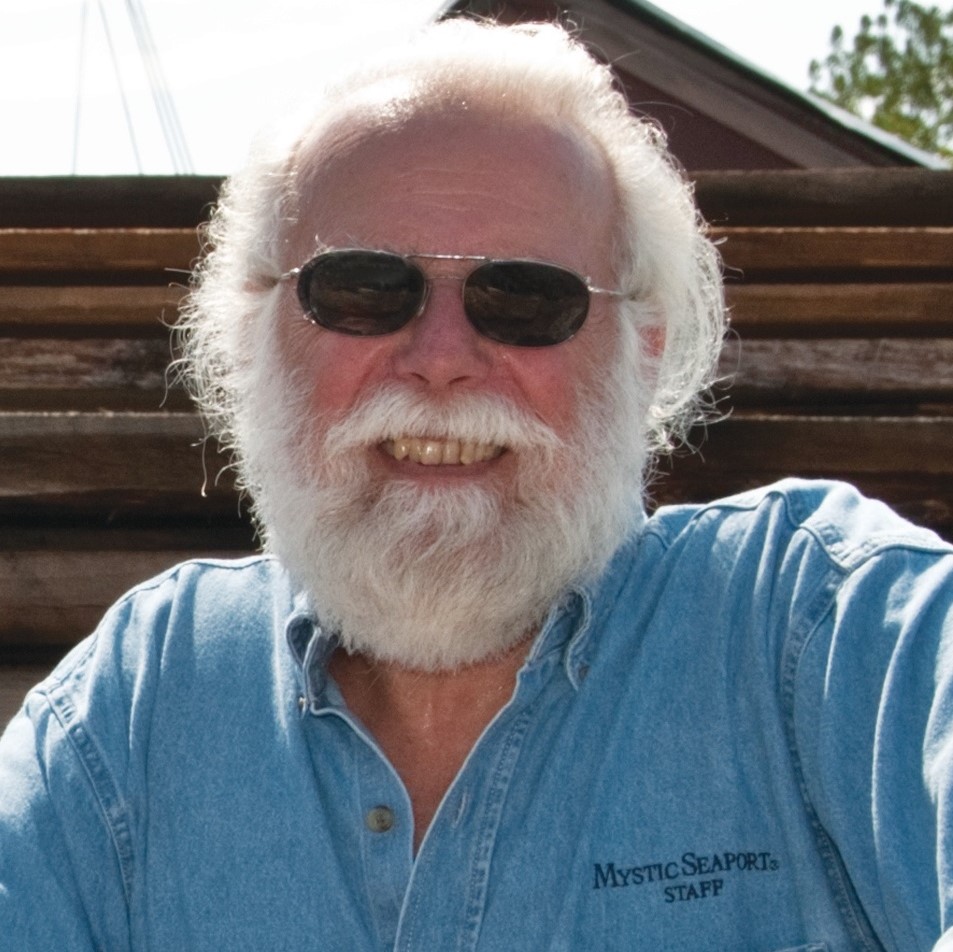 When asked why Plimoth Patuxet chose to collaborate with Mystic Seaport Museum on the Mayflower II preservation project, Capt. Perry explained that “Mystic Seaport is the holy grail of wooden boat preservation. They have an incredibly skilled staff and the infrastructure in place for doing projects of this magnitude.”  That’s where our third panelist, Quentin Snediker, comes in.  Quentin is the director of Mystic’s Preservation Shipyard and senior curator of the museum’s watercraft collection, which presently numbers more than 500 vessels, including four National Historic Landmarks, among them the 1841 whaleship Charles W. Morgan. 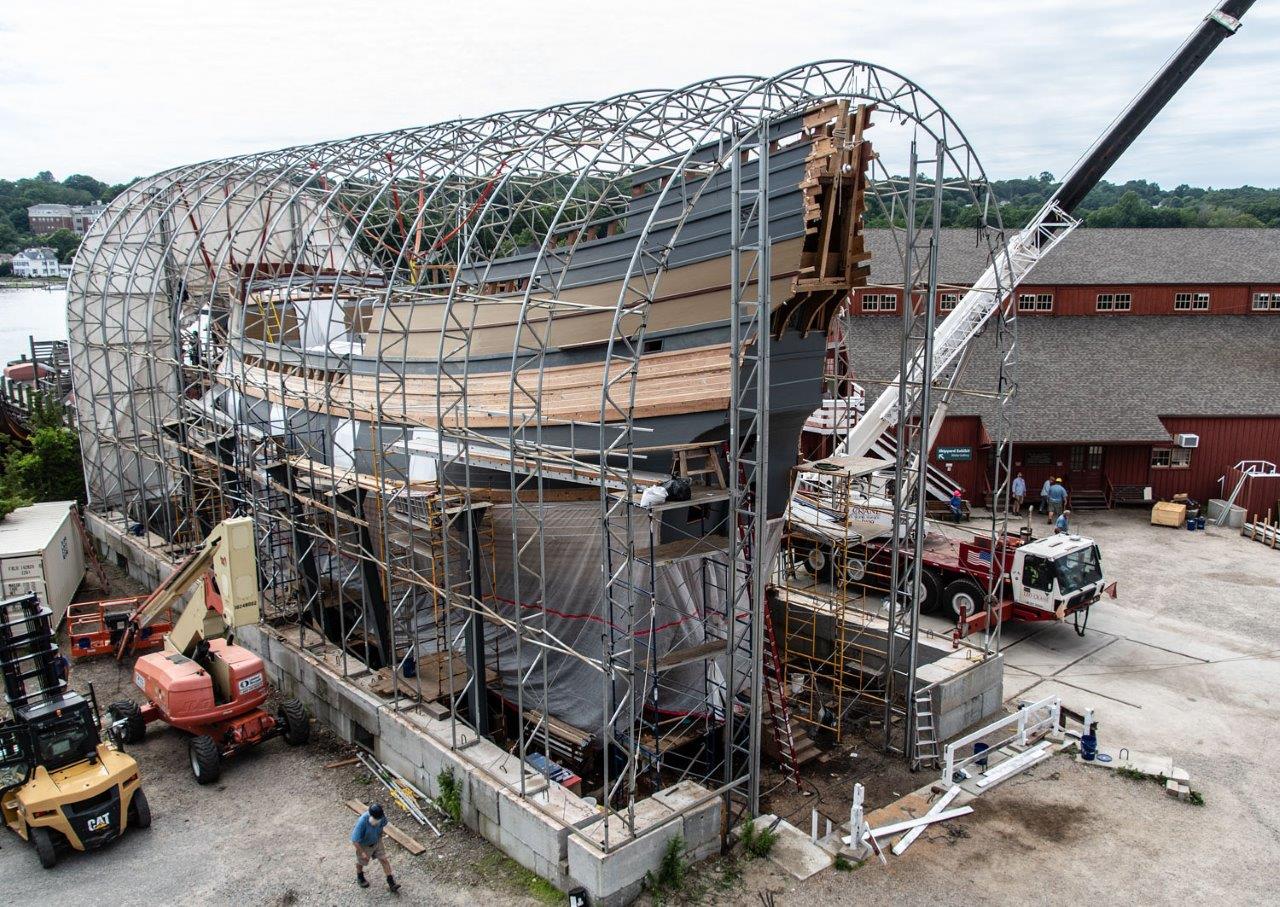 Under Quentin’s watch, the 63-year-old Mayflower II was preserved and made seaworthy again.  Skilled shipwrights and artisans fully restored the ship as accurately as possible, drawing on the plans designed by MIT-trained naval architect William Avery Baker for Plimoth Patuxet in 1955. As a full-scale reproduction of the Mayflower, Mayflower II retains details of the original ship – from the solid oak timbers and tarred hemp rigging to the wood and horn lanterns and hand-colored maps – all carefully re-created to give visitors a sense of what the original 17th-century vessel was like.  The restoration itself replicated the traditional shipbuilding methods used at the time, and a highlight of the collaboration between Mystic and Plimoth has been the knowledge exchange among those tasked with making Mayflower II shipshape.

It’s going to be a great seminar!  Join us for this informative and inspiring panel discussion as we commemorate the quadricentennial of the Mayflower’s arrival on our shores, it’s lasting impact on the American narrative and the restoration of Mayflower II.  Register at the link below!